Red Quinoa and Mange Tout salad with cardamom and lemon

Salads are an all time favourite of mine, be them green leaves or what I like to term as “MAN-SALADS'” (this is best said with a chest puffed out and a deep macho voice)

Salads needn’t be a sprinkle of tasteless leaves plonked on a plate, insultingly low in calories and unexciting to the taste buds, the punishment of some post festive gluttony. No, salads can be eaten by real men and yogi women alike.

I pride myself on my ability to feed men salads and for them to actually enjoy them, ask for seconds and NOT dash down to the nearest steak joint for the meat need. My Man Salads, as I call them, are protein rich, textured and can be served hot or cold. 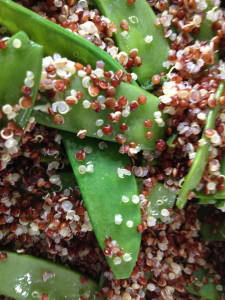 This super simple dish is wonderful as an accompaniment to a poached rainbow trout, grilled chicken breast with green chilli salsa, baked feta topped with za’tar or as part of a salad feast. Full of fibre and super clean, I love this dish.

You can make a bog batch and pop some with a couple of boiled eggs and a slice avocado and a little salad dressing in a lunch box the next day, the envy of the office you shall be!

A few interesting facts about Quinoa